Get me outta here!

I was pleasantly surprised when I found that I read the first chapter in one sitting. Sometimes, instructional books can be overwhelming and it takes me a few sittings just to sift through everything. I think it helped that I could relate to the picture they are painting.

The sisters start out explaining how they began and I think I was shaking my head yes, yes, yes the whole time I read it. If feel like they were describing my classroom. It’s center time with students working in their groups working on some type of activity or worksheet. Me the teacher is with my small group. Most of the students are on task and if the principle walked in all would look great. Unless, they stayed for more than 5 minutes then those fews students loose focus. One of my reading buddies end up in the air, a kiddo forgot the directions, or of course the tech isn’t working. It seems that there are always interruptions and I never stay with my small group as much as I would like. Things like Class Dojo help me with behaviors because I can give away points from my desk. It is still an interruption but smaller than if I had to walk over and redirect the kiddo. There are tons of cute ideas out there to help with these interruptions but they take time and always seem to fizzle out. They explain a scenario very close to what I depicted.

The good news is as they continue they stress creating routines that become second nature to the kiddos. More good news you don’t need to think of those routines on your own. I looked at their chart on how they evolved and put a star where I stand. Funny enough I was at their 10 years later column in most areas and this will be my 10th year teaching. The now section just made me say, “Yes please!” or “I am almost there!”

They have done all the research to make sure we are not giving kiddos a task that is just busy work. While all of those centers are cute who has the time to grade all of that and to make it all. Why are we making them if research is showing they aren’t helping? This is where the Daily 5 comes from. These are the researched based tasks that are proven to help students learn.

Talking about Daily 5 and putting it into use takes time and they really stress that in this chapter. It’s a process to build independence and stamina. Which are very important as they head into state testing. In this book they tell us how doing all of the Daily 5 in one day may not be realistic because as students gain stamina you don’t want them to stop in the middle of their task.

They moved into an overview of the process and being the visual person that I am I broke it into a guideline of basic steps. I like to think of it as a do not continue if this sounds like too much. Everything will be explained in more detail in other chapters.

*It is okay to do rounds throughout the day not just in one chunk of time.*

It’s a lot to take in for a first chapter and they also dip into their CAFE but I think at this time baby steps. It is time to check the schedule and see if this is even a possibility, if only I had mine. I’ll continue reading because even if it’s not going to work time wise I think the structure and repetition for the students will be beneficial.

On a side note: Have you ever put a tab where you want to end and just crush once you get there? It’s like a little celebration.

On Thursday we celebrated our mid-year PBS acknowledgment. This is my third year being apart of the PBS team at my school. It’s one of those groups where everything is about the kids and that’s what we are all here for. I love thinking that what we are doing is reaching so many kids and is getting help to those who really need it.

We have a whole school acknowledgment at the start of the year, which has a prep rally feel to get the students back into the motions and introducing the program to the younger friends. We are the Yellow Jackets so we hand out paper bees to acknowledge our students. There are various things the classroom can turn them in for. We then have a mid-year celebration. Normally, there is a task that the classrooms have to accomplish before earning the acknowledgment. Something to remind them of our expectations. Then, we have an end of the year celebration. A way of celebrating our accomplishments throughout the year.

As teachers of course we love themes! This year we have the theme of “under construction” or “kidstruction.” The mid-year celebration was a QR code scavenger hunt. We had two different paths one for the 2nd – 4th graders and one for the Pre-K – 1st graders. We had instructions for each stop and a clue to lead you to the next place in the school. At each stop there was a cute activity that my ever so talented co-workers wrote. The art teacher was one of the stops and she had all the kids in the school make a yellow thumb print for a painting. All of those thumb prints will turn into the hive and bees for the painting. Our pre-k teacher wrote the the script for the younger kiddos all delivered with a whimsical rhyming nature. The clues all led to getting a puzzle piece. Then, the class added it to the school wide puzzle to find out what our acknowledgment was. This puzzle was large and hand made by more talented co-workers.

I mentioned in one of my earlier posts that I jump all in anytime there is technology being used. So, when I heard we had decided on QR codes I volunteered myself. Although, I have never created them before. Who doesn’t love a challenge and a reason to jump into new technologies for the classroom?

I have to admit this was a tougher challenge than I thought it was going to be. There were more hoops to jump through than I predicted. My first hoop was becuase I had decided that the QR code was not going to link to a static image. It didn’t make sense to me because then why wouldn’t we just print that and hang it. Then began my search for animation programs. My first thought was to have a character speaking to the kiddos. If I was really lucky maybe a bee.

There were plenty out there but the avatar either looked really weird, you had to pay to download them, or you had to pay for the program itself. After I exhausted that option, hours and days later, I found a program that allowed me to animate an object on a background. To have it move around the screen overlaid on the background. You would then add your own audio. The hoop to jump here is with the free account they only let you download 5 videos. After a lengthy hunt I finally found a program that allowed me to have more access as an educator (Moovly) . I signed up and started to play with the system. I am not sure if it was our network or the program but it was very glitchy and it was not easy to use due to this issue.

All of a sudden everything just clicked. This was pretty much just editing software. I have a Mac at home and have iMovie. Can iMovie have moving parts? Can it allow me to have a background and an image moving on the screen? I already knew the answer to my last question, can I then overlay my own audio? The answers to all of this is yes! The process is called an animated keynote. This was exciting as I would not need to learn a new program because I have made plenty of videos with iMovie. I looked it up and sure enough there was a YouTube video on what to do.

Can you say easy peasy lemon squeezy?  If only I had known this before! All the headaches! I had already taken pictures of all the stops in the school and we had bought a clip art bee! Now to put it all together. The steps are pretty simple. You add the background, in this case it was my pictures, and then add the picture you want overlaid on top. You crop both photos to fit rather then the Ken Burns crop. You click on the overlay and choose picture in picture, resize, and you are almost done. There is a small diamond shape that shows up and you click on the timeline and move the picture to where you want it and click the icon again until you are done. Add audio or record right in iMovie. Export and viola you have an animated video! For better instructions just google it or search right on YouTube.

A hoop complete! Now for the QR codes. Which if you know anything about QR codes they are pretty simple to make. It’s when working with a network designed for students that it becomes tricky. There are a bunch of safeties built into our system. On a normal day these are wonderful because it helps stop from kiddos getting where they shouldn’t be. Which now includes blocking YouTube and TeacherTube. Again, wonderful on a normal day. Here is the next hoop… where do I host the videos? Our lovely IT friend helped me with this one. He told me to use our Google Drive account. Surprise, this is also blocked to only share within our district (another great safety feature on a normal day). These were created for us about 2 years ago and now are not used by most of our staff. So, having someone log into their account was not an option. Que the IT guy… He told me that they are capable of turning on sharing with the world. This is a big deal and we had to wait on the powers that be to approve this. I created the QR codes thinking they would just have to turn on sharing and I would have to do the same on my end. Did it work?

Nope, I did one step differently and had to create all new QR codes. In the end it was okay because our IT friend taught me a new trick. We were using some iPad minis and the videos were not playing full screen. If you open the video in a new screen and change the /view to /preview?autoplay=1 your video will play in full screen! This adds more steps but it was worth it! He also had suggested to use a goo.le to shorten my links. This helps to make a smaller QR code. Both very good tips!

To sum up my long journey the day of was amazing. Which is why we do what we do. We had Pre-k to 4th grade all working on expectations in a fun way. I had many laughs and my kinders had no clue why we earned our treat but I think that’s okay at this level. They were following the expectations while having fun and not realizing that we were learning/reviewing. 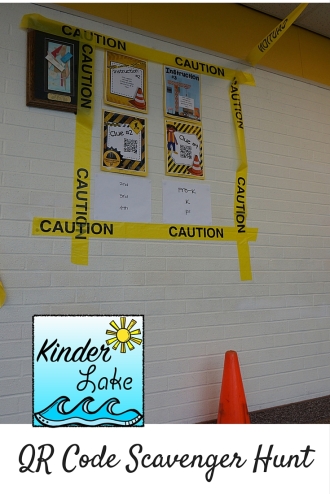 Kinder Lake is a participant in the Amazon Services LLC Associates Program, an affiliate advertising program designed to provide a means for sites to earn advertising and linking on Amazon.com